What a day! After a nerve-wracking, but above all very cold day, we are happy to announce that the steles are in the cemetery .
The technical relief organization started to transport the concrete foundations from Dortmund to our flower cemetery as early as nine-thirty in the morning. Not an easy task considering that a concrete block weighs 5.6 tons! But the work went on, finally the foundations had to be transported from the truck into the ground. There 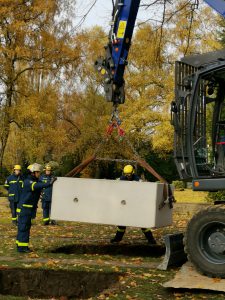 precision work was required, mainly because the operations manager explained to us that they had never completed an operation of this kind. Hats off to that, because the foundations ended up in the dug holes without any major complications. However, the two commemorative steles then only had to be picked up by ThyssenKrupp from the training center in Bochum and the cold slowly began to gnaw at us… But when the steles finally arrived, we faced a much bigger problem: the holes for the steles in the concrete blocks were only 15cm wide. While the stele itself is only 10cm wide (still weighs 1.8 tons), additional stabilizers were added to either side of the monument, making the stele 20cm wide.
Luckily, Mr. Mink was able to report to us later in the day that the steles are up and around 3 p.m. only Mr. Wicking remained for the finishing touches. Therefore, from the project course, a big thank you goes to the THW, without whose support the monument would definitely not stand, as well as all other active helpers and supporters, the former project courses and of course Mr. Wicking, who put so much passion and commitment into the implementation of the project contributed and continues to contribute.
We would also like to invite you again to the national day of mourning organized by us on November 17th, 2019, tomorrow, Sunday, where you can admire the monument to the 307 forced laborers in the flower cemetery after the wreath-laying ceremony.